The Mystery of the New Salamanca Cathedral (Lesson Plan Included)

The Mystery of the New Salamanca Cathedral (Lesson Plan Included)

At first glance the New Cathedral of Salamanca (Catedral Nueva de Salamanca) resembles any other impressive Spanish cathedral. However, upon closer examination of the building’s intricate exterior, visitors are faced with a confounding mystery…

Hidden amongst elaborate carvings of saints and important scenes from the Bible is a perplexing statue of an astronaut. Nearby, a carving of a mythological faun holding an ice cream cone stares down any curious onlookers. 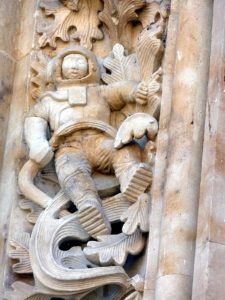 How did such modern images find themselves on the face of a 16th century holy site? 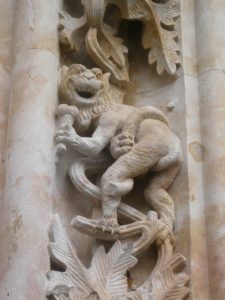 The mystery has sparked numerous outlandish theories involving everything from extraterrestrial intervention to ancient time travel. While imaginative minds might enjoy speculating about the carvings' supernatural origins, the explanation is actually quite simple.

Originally built between the 16th and 18th centuries, the cathedral underwent restoration in the 1990’s during which time stonemason Jeronimo Garcia obtained permission to add some modern figures to the historic facade. According to cathedral building tradition, every time these important buildings are built and/or restored, stonemasons will add a new detail as a type of artistic signature.

Though the mystery of the stone astronaut may be solved, the New Salamanca Cathedral remains a beautiful and fascinating sight to behold. Built over the span of two centuries, the cathedral boasts both Gothic and Baroque architectural styles and an absolutely stunning interior.

LESSON PLAN: Uncover the Mystery of the Salamanca Cathedral Through a Hands-on Project

After an introductory reading (in Spanish) about the mystery of the cathedral, task students with the hands-on project of making their own modern cathedral figure which will be used to form a classroom cathedral-style wall/door. Students will love showing-off their creativity and unique personalities as they build their own classroom masterpiece. What’s more, research has proven that students learn and retain content better when they can relate it to their own life and interests. As a closing activity and/or assessment, students will write in Spanish about their design.

Content Objective: Students will be able to describe the notable features of the Salamanca Cathedral and explain why the Cathedral has mysterious carvings

Language Objective: Students will read a text about the Salamanca Cathedral and identify the main idea (the mystery of the carvings). Students will write a text in Spanish explaining their own cathedral figure design

When traveling with students to Spain, Salamanca is a quick and easy day trip from Madrid!

Prométour has offices around the world, including one office in Málaga, which gives us a true advantage when it comes to organizing educational student tours to Spain! You can rest assured knowing that we’re the leader when it comes to creating customized educational travel itineraries to this beautiful country!