The Sights of Lisbon - City Essentials

The Sights of Lisbon - City Essentials

Portugal is quickly emerging as one of Europe’s most sought-after destinations. The country’s dramatic coastline, powdered beaches and seaside towns create a seemingly quaint escape surrounded by an abundance of natural beauty. While you’re sure to stray to the coast during your Portuguese adventure, you would be amiss if you didn’t explore the country’s capital, Lisbon. With its lofty canopy of palm trees and endless flow of cobblestone streets, Lisbon will leave you yearning for more.

Begin your Portuguese journey by leaving central Lisbon for Belém and visit the city’s ancient gateway, the Toro de Belém. Aptly named after the surrounding neighborhood, the Belém Tower stands by the River Tagus and was essential during the Age of Discovery as it served as the city’s fortification. In modern times, the Belém Tower is a UNESCO protected sight and a major tourist destination. After your stop at the Belém Tower be sure to visit the close by Jerónimos Monastery and Padrão dos Descobrimentos.

Only 5 minutes away from Belém Tower is the breathtaking Jerónimos Monastery. King Manuel I commissioned the monastery and it took 100 years to be built. To the trained eye, the monastery perfectly exemplifies the Manueline style of architecture. Fortunately, you do not need to be an Art History student to appreciate all that the monastery has to offer; the intricacy of the stories depicted in the stone archways are captivating and the vaulted church will astound you. The Jerónimos Monastery is a must during your detour to Belém. 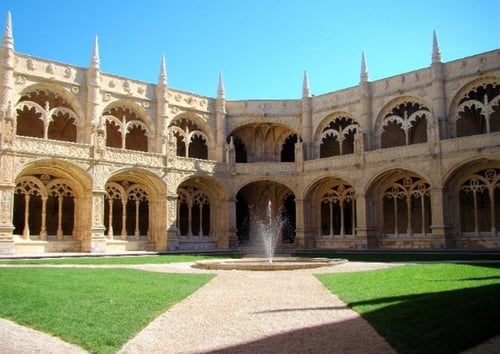 Wander through the courtyard and see the detail in the arches.

Our last essential sight in Belém is the extraordinary Padrão dos Descobrimentos. The monument was built in 1939 on the banks of the River Tagus and like many monuments in Lisbon, the Padrão dos Descobrimentos celebrates Portugal’s Age of Discovery. The monument is modeled like the bow of a ship with a series of sculptures depicting influential Portuguese figures on the side. Climbing to the top of the monument is worth every step as you will get a perfect view of the Rosa-Dos-Ventos, a limestone compass which paves the square below and the neighbouring monastery.

Return to Lisbon and tour the historical Alfama neighborhood. First and foremost, we must warn you to be wary of the neighborhood’s notoriously steep lanes and to wear comfortable walking shoes. Properly equipped, you will be able to appreciate the ancient charm of Alfama. You will surely fall in love with the colorful buildings, unique shops, and authentic restaurants. We suggest going for a meal at Antikuario Café, located on Rua de Sao Jose, its menu is filled with classic Portuguese dishes all served in a revamped antique shop! If you need to give your feet a break from the unending cobblestone be sure to take a ride on the iconic no. 28 tram and lose yourself in the picturesque neighborhood!

Spend an afternoon climbing the steep streets of Alfama.

Built after an earthquake destroyed much of Lisbon, the Praça do Comércio became the city’s central economic hub. The square was initially filled with government offices and has since become one of the city’s top tourist sights. The square includes the Arco Triunfal da Rua Augusta, the statue of Dom José I, and a beautiful staircase that once served as the welcoming area for dignitaries arriving by the River Tagus. In present day, the square is home to many restaurants and fittingly becomes a market on weekends! 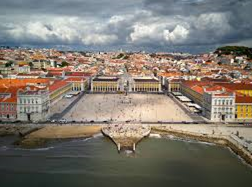 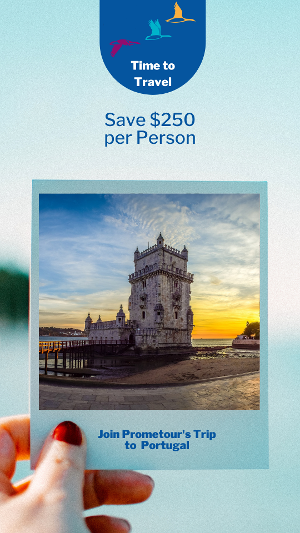